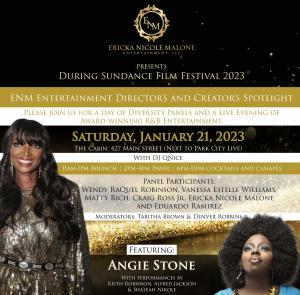 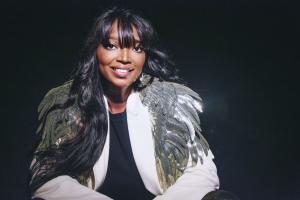 In celebration of diversity in filmmaking the Sundance 2023 experience will feature panel discussions and live performances by Angie Stone and Keith Robinson.

It is important for me to host an event that will be impactful to those who attend while initiating conversations surrounding inclusivity in Hollywood,”
— Ericka Nicole Malone
LOS ANGELES, CA, UNITED STATES, January 10, 2023 /EINPresswire.com/ -- On Saturday, January 21, 2023, Ericka Nicole Malone Entertainment will present the "Indie Director's and Creator's Spotlight" during the Sundance Film Festival at the Cabin on Main Street (located at 427 Main St. -- Park City, UT 84060). The invite-only event celebrates diversity in filmmaking and a day of education, inspiration, and entertainment. Hollywood veterans and creative newcomers will come together in an elegant yet comfortable environment to network and explore exciting collaborations amidst the diverse and multicultural filmmaker community.

Panels will begin at 10 am and continue through 4 pm, with topics such as "Breaking Through: How to Break Through Barriers of Diversity in Hollywood," "Cinematography as a Person of Color in Hollywood," "How to Transcend from Acting to Creating in Hollywood," and a special screening of "Birth of the Political Underworld" trailer.

In addition to traditional filmmaker conversation, the "Indie Director's and Creator's Spotlight" will offer light bites, warm beverages, cocktails, mocktails, gifting, and free-flowing sounds by Dj Q-Nice. From 5 to 11 pm, as a finale to a day of diversity and inclusion discussion in film and television, Ericka Nicole Malone Entertainment will transform its event into a Neo-Soul Lounge with live performances by Keith Robinson, Sha'leah Nikole, Alfred Jackson, and 3x Grammy Award-nominated songstress Angie Stone.

About Ericka Nicole Malone: Ericka Nicole Malone is a producer, director, screenwriter, and playwright building her entertainment brand in Hollywood. Ericka's latest project, "Remember Me: The Mahalia Jackson Story," is a feature film starring Grammy Award-winner Ledisi as the iconic Mahalia Jackson and an all-star cast including Columbus Short, Janet Hubert, Keith Robinson, and Corbin Bleu. The film has garnered 22 award wins and nominations during its film festival run, including "Best Narrative Feature Audience Award" Pan African Film Festival (PAFF) and Roxbury Film Festival, "Best Feature Film," Las Vegas Film Festival and Charlotte Black Film Festival, "Best Diaspora Narrative Feature," African Movie Academy Awards (AMAA) and a nomination for HBO's Best Feature Film at Martha's Vineyard African American Film Festival, to name a few. In addition, "Remember Me: The Mahalia Jackson Story" is exclusively streaming on Hulu. Early in her career, she understood the obstacles faced by female filmmakers and women of color, so she chose to bet on herself. Upon founding Ericka Nicole Malone Entertainment with business partner Phillip E. Robinson, this allowed her to combine her business savviness with her love for writing, resulting in success on the theatrical stage and in film.

For inquiries or corrections to Press Releases, please reach out to EIN Presswire.
✕
× Close Ad