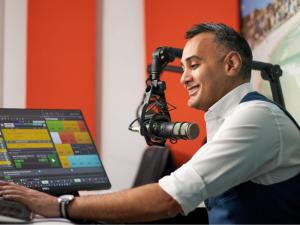 Global Influencer and renowned public figure Ahmad Imam wins the Male Influencer of the Year Award at the Visionary and Excellence Awards 2022 Dubai.

Acknowledging his outstanding contributions as an impactful influencer both online and offline, Ahmad Imam was honoured amongst an eminent group of individuals with an exceptional prize at the glamorous night organized by Vivz Fashion School with the theme of explore, innovate, and inspire.

Outstanding entrepreneurs, visionary leaders and trailblazing personalities were honoured at the annual awards ceremony. The awards program seeks to recognize and celebrate the most successful and innovative personalities from across the region and represent the benchmark for excellence across multiple categories.

Ahmad Imam, a man with an ample skillset to inspire and empower through his own example, navigated the social media, business, and entrepreneurial landscape with such finesse that the expedition itself deserves applause and recognition.

It is no surprise that his efforts are appreciated and acknowledged. Ahmad Imam was also recently honoured with one of the most respected and prestigious positions being appointed and serving as the Ambassador to The Royal Office UAE.

The fourth season of the Visionary and Excellence Awards was organized in Dubai to applaud the visionaries who have accomplished excellence in their fields.

Other than Ahmad Imam, other notable personalities who were rewarded with different awards included Bollywood celebrity Rakhi Sawant, Tennis star Sania Mirza, founder of Danube Properties Rizwan Sajjan and many others. It was a gala event unlike no other, and top figures from across the region were honoured for their vital contribution to the region’s ongoing success story as a global hub for entertainment, innovation and business.

Ahmad Imam
______
email us here
Visit us on social media:
Facebook
LinkedIn
Other

For inquiries or corrections to Press Releases, please reach out to EIN Presswire.
✕
× Close Ad