COLUMBUS, Ohio, May 13, 2022 /PRNewswire/ -- White Castle invites customers far and wide to enjoy a complimentary Cheese Slider on National Slider Day, May 15. All they have to do is visit their favorite White Castle and present a digital coupon that can be found on the company's social media channels. No purchase is necessary to receive the free Cheese Slider. 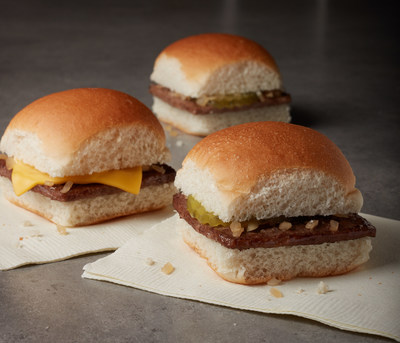 Anyone who visits White Castle on May 15 - National Slider Day - can get a free Cheese Slider.

National Slider Day is one of the most significant days of the year for White Castle. It gives the 101-year-old, family-owned business an opportunity to celebrate the little square burger that made them famous while showing their appreciation to the loyal customers who have fueled White Castle's popularity and success through the years. White Castle expects to give away tens of thousands of Cheese Sliders at its more than 350 locations.

"Giving our Cravers a complimentary slider on National Slider Day is one way of thanking our devoted fans," said Jamie Richardson, vice president at White Castle. "We're so grateful for their unparalleled passion for our sliders as well as our other delicious menu items."

White Castle offers more than 15 varieties of beef, chicken, fish, egg and plant-based sliders for breakfast, lunch and dinner, including the brand-new 1921 Slider, the Chicken & Waffles Slider, the Panko Breaded Fish Slider, the Breakfast Slider and the Impossible Slider, as well as limited-time seasonal favorites, like the Seafood Crab Cake and Sloppy Joe sliders. There's literally a slider for every taste, available any time of day.

White Castle fans have been known to go to great lengths, both literally and figuratively, for White Castle sliders. In fact, according to a recent national survey of 2,000 self-professed hamburger fans, nearly half (48%) of them said they would travel 30 miles or more for a White Castle slider, while more than 1 in 4 of them (27%) would go 50 miles or more. Fortunately, no one needs to go that far to satisfy the crave. White Castle's coast-to-coast retail presence means people can find several of these great-tasting sliders, including The Original Slider and the Classic Cheese Slider, in the freezer aisles of their nearby grocery, club and convenience stores.

Both the retail and restaurant versions of the tasty little burgers can be used to make all types of delicious dishes, from soups and salads to quiches and casseroles. Check out the White Castle recipe website for inspiration!

White Castle introduced National Slider Day in May 2015 to honor the iconic, steamed-grilled-on-a-bed-of-onions hamburger. Though the Original Slider is highly regarded for its hot and juicy taste, the 100% beef patty is equally as famous for its 2-by-2-inch size, making it so easy to eat it was dubbed the slider.

White Castle, America's first fast-food hamburger chain, has been making hot and tasty Sliders as a family-owned business for 101 years. Based in Columbus, Ohio, White Castle started serving The Original Slider® in 1921. Today, White Castle owns and operates more than 350 restaurants dedicated to satisfying customers' cravings morning, noon and night. Through its retail division, which launched in 1987, White Castle also offers its famous fare in freezer aisles of grocery, convenience and club stores nationwide. The Original Slider, named in 2014 as Time magazine's "Most Influential Burger of All Time," is served alongside a menu of creatively crafted Sliders and other mouthwatering food options, including White Castle's Impossible™ Slider, named by Thrillist in 2019 as the "Best Plant-Based Fast-Food Burger." White Castle's commitment to maintaining the highest quality products extends to the company owning and operating its own meat processing plants, bakeries and frozen-food processing plants. In 2021, 100 years after the first Slider was sold, Fast Company named the fast-food pioneer one of the "10 Most Innovative Dining Companies." White Castle is known for the legendary loyalty of its team members, more than 1 in 4 of whom have worked for White Castle for at least 10 years, and also for its faithful fans ("Cravers"), many of whom compete each year for entry into the Cravers Hall of Fame. The official White Castle app, available at iTunes App Store or Google Play, makes it easy for Cravers to access sweet deals and place pickup orders at any time. They can also have their orders delivered using one of White Castle's delivery partners. For more information on White Castle, visit whitecastle.com.